FF: Where IS Caution Headed With These?

Our excursion this week will actually be an experiment to determine if I really am able to post about absolutely nothing. No theme. No pre-thought. No nothing. To assist me, I've joined forces with the most cooperative Mrs. 4's and Sara, who specialize in bloggers just like me.

~Our 9 year old has fallen in love with the theater. He is going to play Winthrop in a local production of "The Music Man" and we have concerns about his ego size. Each time he walks into a rehearsal, dozens of teen-aged girls call out, "Ooh! He's here!!" Our boy then struts into the room. The performance isn't until February and that seems like a very long time for an ego to grow.

~Our daughter, aka a Who in "Seussical the Musical," is not quite so taken with her role. She is to find an "old-fashioned looking dress" for her costume and was told to look at the thrift stores. I haven't yet seen something like this at a thrift store. 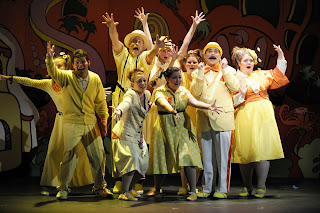 ~Our 6th grader has a close friend who almost died last week from diabetes. Previously, he had no symptoms and there appears to be no family history, but he carries the gene and then got the flu and strep back-to-back. It is thought that those illnesses and the stress on his body somehow activated that gene and the diabetes. Very frightening.

~I am still a student and have made it through week two of eight. Honestly? I don't mind the hands-on assignment like changing my home page and posting and responding (it's much like blogging :))), but I really am not enjoying having to think (take course objectives from a class I currently teach and classify them according to Bloom's taxonomy.) Blah.

~I found no new and happy Weight Watchers recipes this week. Help?

~Our youngest child has been doing very well in school this year with a teacher he's well-acquainted with and who has a very low-key, highly organized style. But this week, the teacher had the nerve to get sick and call in a substitute. Sometimes just having a substitute come in and change the bathroom rules can absolutely paralyze a child into complete anxiety and inactivity in the classroom. My poor little guy.

~I wish I had the legal right to cut off each middle finger flashed at me. Yesterday, in the dark morning rain, I was partially into a right-hand turn but stopped for a school bus to load. After the stop sign was turned off, I continued my turn only to almost hit another mother who decided to make a left-hand turn right in front of me. Evidently, I didn't accelerate quickly enough for her. She did, of course, flip me off after HER mistake. I am so sick, sick, sick of middle fingers. Such cowardice.

~To end with a happy thought now, I cannot get into Facebook and am worried that maybe my account has been hacked into and messed with. (Yes, I am ending that sentence with a preposition.) So what's happy? I have no choice but to clean my house now.

~So maybe that wasn't a happy ending at all.
Posted by Caution/Lisa at 6:09 AM

I was totally locked out of my account most of last week. I found if i unchecked the "remember pw" button it worked. Weird but it worked...

If you think your son's ego is in danger now, wait until he hears the applause. Esp that final personal applause during curtain call. Damn i think my ego just got bigger with the memories. LOL

Crap...does that mean I should stop giving you the middle finger right now?? :)

I'm locked out of FB too. I thought maybe it was a sign that I needed a break:)

That's scary about the friend with diabetes... wow!

I dont know if you're interested - but I use a site called E-mealz.com - they have 5 days worth of receipes & you can pick which kind you want - they do have weight watchers meals with the point values. I havent used that, but love the option I have (Low fat meals for 2)... I dont work for them or anything - just a user & saw you didnt find any good stuff for the week...wanted to share - may be a possibility for you.

Stopping by from SITS! My middle son was involved in musical theater as well. the SAME thing happened to him. All the girls in the plays loved him (most of them were younger) and several of them even wanted his autograph. We were sooo glad when that was over....

I think little may need an agent;) And that health scare reminds us that life is fragile. I wish I could stay away from FaceBook. It's sick how much time you can waste in there...

Everyone is in a hurry these days and it's super scary when they get behind the wheel!

FB is uploading something that resembles itunes today...it obviously has problems with it's bandwidth. You can send a song to a friend for .40 or you can download it for .90...guess they figured they would try to make some money while we were all there.

You writing about nothing is always something. Love your new little EGO
boy...this is fun to see I am sure.

Very scary about the child with diabetes...very scary.

I think people who give the finger to others are only showing you their true IQ. Idiots. I have only given the finger to my Mom and husband. Of course discreetly and only in fun. :)

I'm thinking for the old fashioned dress you are going to have to go to a vintage costume store or something like that (or raid some old lady's closet :)

neat that you have talented kids who enjoy acting; I have always had stage fright

I think (sometimes) its better to keep a kid home from school than send them to school when there is a substitute (of course one never knows when the teacher might have one). I know there are good substitute teachers and I'm not knocking them because they go and do their best, but I have learned through my own experience with my kids that days when there are substitutes are usually days of no learning

that was scary about the boy with diabetes

all in all, I hope you have an enjoyable weekend

NOOOOOOO! Step away from the cleaning supplies! I don't want to be the only one with a dirty home;)

Yesterday, a friend sent me a "Friend Request" on FB. I kept trying to accept it, and kept getting an error message. After some angry keyboard clicking, it sent me a message saying that I was about to be reported to FB for abuse! Then, it said that my friend was confirmed!! What a mess. I can't stay away from it....

Aren't you glad it's Friday?

THEATRE! A subject near and dear to my heart!! I love that your kids are involved. I found many, many costumes at Goodwill back in my theatre days!

Well I hope you house is clean by now. :)
I think the post about "nothing" was very interesting! :)

People who flip the bird make me laugh, hysterically, it's so pathetic. It's all fear. Actually, all bad behavior is born of fear, but we don't need to get philosophical here except for the following:

Confucious said, "Don't worry about it" and he was talking about everything up to and especially housework.

My daughter cooked something from my new WW cookbook today. I can smell it when I walked in after work. It's one of those recipes that you cook something one night and then magically turn the leftovers into something great again the next night. I will pass the recipe along if it is any good!
I have to confess...I use that middle finger when peop pull in front of me. I don't use it when someone does something they are supposed to. But I kind of use it as a sign that I am not pleased. So for all those middle finger flippers out there, I apologize!

That's scary about the child with diabetes. :(


I just signed up for E-Mealz.com and you can pick "point system" menu which is basically the same as weight watchers. I love it!

what size dress and does it have to be a certian color?

Stopping by from SITs. I enjoyed your free associations....sounds like your have quite the little theaspians there -- should be fun to watch the performances....re people's nondriving skills these days- nothing surprises me anymore -- most are incapable of even using the turn signal or leaving off the damn phone for an instant to concentrate on driving.....glad you are into your skinny jeans again! That's such a boost......

You write about "nothing" very well. I have a 7 year old grand daughter who is doing musical theater. Her group has one boy to every 10 or 12 girls, so the boys get lots af attention. She is Genie in "Aladdin" due to the shortage of boys.

You would have quite a collection of middle fingers if you were to take a hacking to them. I don't get the point of such vulgarity.

If I mentioned this to you before, my apologies. But you must check out fatsecret.com. It's a free site (I don't work for them), where you sign up to something like a facebook for dieters. If you're on WW, you put that on your profile, you use their online food journal and it calculates all your points and gives you access to hundreds of WW recipes. It's fantastic.

Theatre is so much fun! I was in theatre arts in school. I loved it.

A 6th grader getting diabetes from an activated gene!? Sad and scary indeed.

I cannot believe this about you getting flipped off. Some people are so disrespectful, tacky and immature.

Say "Hi" to all the Whos down in Whoville for me, wouldja? Thanks!

Hope Facebook is now behaving itself and saving you from the housework! Otherwise you'll have to flip IT the middle finger!

I wondered where you were on Fb! Try resetting your password - I've had to do that before.

For a posting about nothing - I sure learned a lot about the last few days!

I hate when the only choice is cleaning the house. I hope you got the FB problem worked out :)

I'm so excited about your Seussical production and hope you'll send me a clip of your JoJo, so I can compare, heehee.

Such cowardice? Would you prefer that she leap out of her car and pound on your window? I'd prefer the finger! :)