Once upon a time, a husband had a birthday. For days prior to his birthday, his wife contemplated what she would give to her husband. She was certain that the greater the gift, the more love the husband would feel from her. She decided that since her husband had lost 25 pounds since Labor Day, she would honor his request and buy him some weights. But where would the weights go?

So the wife formed a plan. It was a plan to declutter the basement and open floor space for the new weights. She got her children's approval. She got her homework done in order to free-up time. She nearly killed her back dragging her much-maligned Ab Lounger 2 up the stairs and into the car and to a store which bought it from her. She worked and worked and finally that floor space was clear.

And that is where the proverbial wheels fell off her plan.

No matter how much additional time she invested flirting talking with the salesmen at the sports stores, she truly had no idea what the husband really wanted. She thought about just buying one of the cuter machines, but she knew that would only mean she would have to bring it back after her husband tried to hide how much he hated it.

Time moved away from her and soon it was time for the family to eat the celebratory birthday dinner. During dinner, the children all began to recall that they each needed emergency school supplies for the next day. At some time, therein, the husband and 7 year old son had an argument about the husband's new age, and the husband learned that he is actually a year YOUNGER than he thought he was.

When, during the eating of the so-so crock-pot Weight Watchers cake, the children asked if it was time to open presents, the wife was forced to admit that there was not a single gift for the husband.

After dinner, the husband and wife went to Walmart to get the necessary school supplies. While there, the guilt-stricken wife bought her husband a belt and two pairs of Walmart jeans.

Amazingly enough, he still seems to love her. 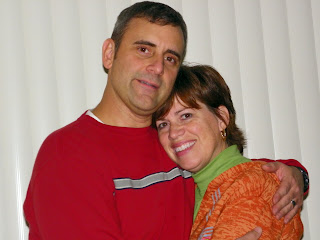 Such weighty matters. Now he'll tell you after reading this.

Of course I love my wife. She brings gifts to the family daily (Thank-you, Walmart). And don't think that this photo represents a brief cuddly moment. It took 10 tries and 4 kids/photographers to get it just right. I love you, Honey, and I had a great birthday with you and the kids (once number 3 figured out what to order for dinner). Am I 50 yet?

there is a weight bench and weights on my front porch you can have... cory got them at academy sports i think... and they have decorated my porch ever since... please come get them!!! please... please... come :)

Stopping by from SITS. :) Awe, love your Hubbies comment. My hubby gets Walmart pants for his bday and Christmas. LOL.

This is so sweet. Your love for each other is obvious to your family and your blogger friends!!!
I am also glad to know that I am not the only one who forgets how old she is, thus my reason for acting immature.
Great picture!

Learning you are a year younger is the best birthday present ever!!

BTW - I have a Bowflex for sale, CHEAP!!

AND he's a year YOUNGER than he thought???

AND there's free space in the basement???

That sounds pretty darn good to me!

What Lucy said.
Plus...I think the fact that you thought ahead of time about what he really wanted and went so far as to clear the space for it is a great gift. Now your loving hubby can go with you and pick out the weights he really wants and there is already a place to put them.
I'm thinking he loved you more just because you are you.

Cleaning the basement, family dinners complete with yummy desserts, time with you. Im sure he thought he was getting a great birthday gift! :)

Concur with Lucy as well. You clearly showed intention and did the "hard part." Lucky guy!

Sounds like you've got a peach of a husband!

That Checkered is a keeper for sure! And you both are looking great!! Who needs weights????
<><

its the thought that counts, right? and you had a great thought too! I bet he'll be able to go and get the weights he wants to, being able to pick them out, and still have it considered as a birthday gift

congrats to him for losing 25 pounds! (and I know you've been working hard at losing weight too, awesome :)

(thanks for your kind words :)

I hate trying to find the right gift for Mr.4444. Cleaning the basement would be an AMAZING gift, though.

(I want to thank you for your large font, Caution; I'm having a contact problem and can't read small stuff!)

I am with the others - cleaning the basement and letting him pick out the exact weights he wants is a great gift!