I used to listen to AM radio until I had a met a lawyer who said it was good to know that he wasn't the only nerd in the world.


Then I became a mother and spent the next decade driving around listening to Kidz Bop. Just when I thought I would lose my mind,
I found the FM button and Christian radio.
Dave Ramsey is great, but he makes me feel guilty.

The Christian apologist's talk show host is brilliant, but sometimes

So I discovered how to plug my MP3 player in.

One track Bluegrass, the next some monk singing, the next a Heart tune.

It was very cool until I lost the player.
I decided to become a little more knowledgeable about modern life.
And I learned the names
50 cent
Shinedown
Lady Gaga.

Then, when I felt very hip,
I mentioned the name,
Eminem,
to my students,

"We'd expect you to like him 'cause you're a mom. That's who likes him, you know - middle aged moms!!" 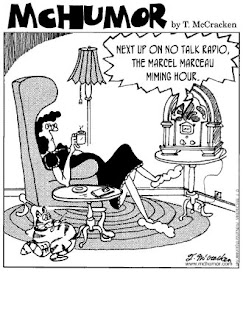 My kids think I'm up on all the artists today - actually I just read People. Try it. :)

I stick with oldies but goodies.

I should have pre-warned you...sorry, I will forever feel guilty about it.

Throw around T-pain, T.I., Flo Rida, and that The Black Eyed Peas are back together.

They will be impressed then.

I listen to all types of music...but some of that stuff drives me batty...and I let the kids know this. Perhaps a sign of old age?
You are too funny.

Ok, now I´m feeling really ancient! ´Cause some of these names I´ve never even heard of! :)

Well you are way hipper than me and that Marlene is a show off!

Don't you know eminem would just crap to think it's only moms that like him. Just think, in 40 years rap will be the golden oldies...

I know Eminem has been around a while now but I still don't think he is really appealing to "middle aged moms" as a whole. I consider you hip! :)

I don't know any "middle aged moms" who like Eminem. Weird! And there's nothing wrong with AM! That's where NPR is! :D

Stick with classic rock. And make fun of their music - say it's all bubblegum pop!!

p.s. Your background/template has finally loaded on my dial-up internet and WOW. Love the colors. Is that flower on the left Simply Red? Or is the one above it Moody Blue?

Thank heaven we have a classic rock station that everybody loves!

And I'm a middle aged mom who can't stand Eminem.

Hilarious :) Glad to hear you have a bluegrass tune on the mp3-now you just need to find it.

It is funny-when I look back over my life I can see those different "mes" too. I've been defined as a Mom for so long-now as my girls grow older-I wonder who I'll be next.