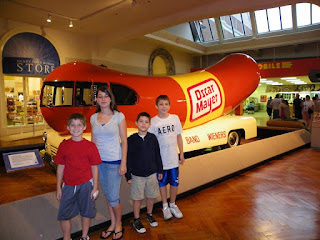 The famed Wienermobile, originally designed by Oscar Mayer's nephew, made its debut in 1936. Although gas rationing kept the Wienermobile off the roads during WWII, it has been back in action since. Each year, college students compete for a one-year rotation driving it cross country. It does occasionally have mishaps, such as this July 2009 incident: 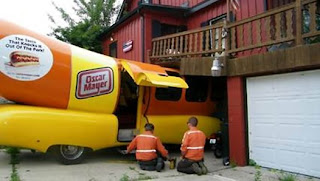 One would like to think that if the Wienermobile were still build on a Jeep chassis, this might not have happened.

Neat! I've never seen the Wienermobile in real life-and had no clue about the college drivers.

I would LOVE to drive the Wienermobile!!

I love the Wienermobile!
Did you know Oscar Meyer died?
A month or so ago.

Once, years ago, the Wienermobile visited my local racetrack. In those days, I was still a a corner worker. It was a pro race, and it was a Sunday, so we had quiet time (local ordinance, no race engines running between 10 AM and 12:30 PM on Sundays). To entertain the crowd, there were various events going on, one of which was the Weinermobile making touring laps.

Someone thought it would be grand to let one of the corner workers have a ride in it for the last lap, a sort of "thanks for getting heat stroke to keep the race safe" thing.

My friend TS won the ride.

He took the Wienermobile hostage. Yes, he did.

They were supposed to do one lap. One. I don't recall how many they actually made...but during one of them, I managed to snap a photo of TS, waving out the window, lunatic smile plastered on his face.

Nothing quite compares to watching a giant hot dog doing hot laps around a road course. It handled remarkably well, considering the speeds it attained. I don't think it was really meant to go that fast.

Eventually, we got them off the track (judicious application of red flags and radio calls telling him his end-of-day beer privileges would be revoked if he didn't let the nice people in the Wienermobile have their toy back).

TS's ride in the Wienermobile is the stuff of track legend 'round these parts...he died not too many years later, but the memories linger, and the laughter.

They gave out Weenie Wagon whistles that day - I still have mine.

Thanks for the memories.

I did get to see the Weinermobile once in my city. I wasn't able to get close up, because it was winding it's way out of the parking lot, but it was fun to see it!

Yikes. I want to go for a ride. Once they get it all fixed up;)

Uh Oh! I always wanted to ride in the Weinermobile.

i just got your comment... NO a bradley sibling would NOT be good... and thank you merania *HOWEVER IT IS SPELLED* they wont have another one for several years.... :)

I have so many fond memories of the Weinermobile.

As a non-American, what does a Wienermobile do? Apart from looking like a big hot dog? Can you buy hot dogs from it, or is it just for show?