A Nasty Stop and then Justice

We forced our children into humiliation yesterday by stopping at Kmart for some last-minute school supplies. Kmart! What were we thinking? Could they have been any more embarrassed had we announced their names over the PA system?

"Excuse me. Is there a high school student here by the name of Daughter Flag? Is she really in KMART with her parents and three brothers? If so, could she come up front because a t.v. crew is here to record this to show at the high school tomorrow."

Things did get worse when our middle school boy actually saw someone he knew. They greeted each other in that strange middle school language and then both turned scarlet red.
Okay, back to the post.
On the way in, we noticed these cars parked nicely. 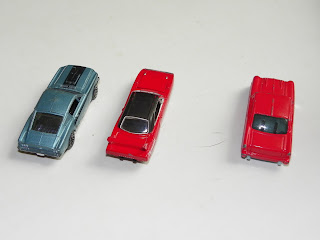 Then we noticed how this car was parked. 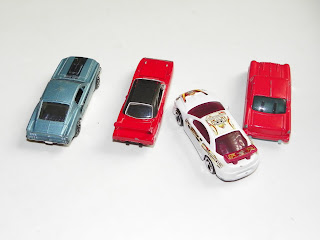 On the way out, after spending $5,000,000 for three folders and two notebooks and all the things I deemed necessary for me to begin Weight Watchers, we watched the driver of the white car maneuver to her vehicle.
In a very condescending tone, a big mouth my husband called out,
"Nice parking job."

Then we moved toward our car while watching the driver of the white car as it drove the wrong way down her lane. Checkered shook his head and wondered about the licensing procedure of our state.

The lane the car was traveling happened to be our lane and the white car came right toward us while the passenger offered his/her (impossible to discern) hand signals in commentary regarding what he/she thought of Checkered.

In response, Checkered shared with them yet another insight he had regarding their car. They continued to hand signal us as they merged with traffic and moved toward the busy intersection ... where they discovered that Checkered was right.
They were, in fact, driving with their trunk open.
And so justice was done by Checkered's standards.
Posted by Caution/Lisa at 6:43 AM

we see those at walmart all the time LOL... which reminds me we do have 2 k marts in augusta still...
thanks checkered for the giggles!
hugs from peach who google hates today

Oh my, I must take you shopping with me next time. I am the queen of bargain shopping!

I sent you an email a few days ago, asking about lunch on Friday. Hope you got it. Also hope you're able to.

Walmart and Kmart both suck donkey balls in my book. Neither is better although people watching at Wally World FAR outweighs the Mart of K!!

First off, WOO HOO for getting your WW self in gear. I am into week two of healthy eating and I am feeling pretty amazing. A few of the girls (you know them all) have started a blog called Big Bunch of Losers and can be found at

You are welcome to join us there to share and vent. We keep it really "real".

K-mart...feel the same way, but sometimes you just can't avoid it and as a parent it is our right and responsibility to emabarass our kids endlessly.

It's good to embarrass your children on occasion.

Justice is served!!!
This made me laugh from beginning to end.
And I think you got a bargain on your school supplies. I had to auction off my kidney.

NOOOOOO.. you didnt make them go in the store with you!!!! hehe!!! I can imagine the embarassement of it all...

& totally was cracking up at your "re-enactment"

Having had a good look at the driver, I don't think she understood a single word I was saying about her driving or her trunk. I mean, who speaks English anymore? At least her son was there to interpret and gesture accordingly. I love our "culture."

I don't do Kmart - but I have the same problems at Wal-Mart. Going there is like descending into the pit of hell!

Welcome to the Losers!!! It's great and we do keep it very real. I have the WW books to - so we can buddy each other (if you'd like).

KMart, Oh the horrors!
And a scene in the parking lot!

You'll be lucky if your kids go out with you ever again!! :)

LOL; this was cute to read!! our nearest K-Mart is about 15 miles away so it wouldn't be too much of a bargain for us to drive there to save money

Funny story! Love how you showed us so nicely how those cars were parked. I can tell you are a teacher. :)

Ha! I hope all their groceries fell out.

"Strange middle school language".....good one, Caution. Ah, yes, how well I remember the years of shopping with school-agers. Enjoy it! Too soon it will be over with.

My oldest daughter used to hit the floor of the car as soon as I pulled into the Kmart parking lot....she never got back up until all was clear and we were on our way home. If I did what Checker did, it would be my luck that they would shoot me.

LOL! Please tell me it was raining and all their stuff got wet!
<><

Now this is funny. The match box cars make it downright hilarious.

Don't know what K Mart is... but the story of the open trunk is hilarious - and well written!

I remember as a kid being mortified of going to certain stores until it occurred to me that if anyone I knew saw me there they'd surely keep it to themselves.