Hey, Mrs. 4444, if my family camps in Michigan's Upper Peninsula this summer, I think we should just keep driving until we get close enough to have dinner with you! Think about what magnificent Friday Fragments I could get from that visit!

~Have you ever received an email from someone and been pleased, but then hours later realized it wasn't such a nice email after all?

~My friend asked if she and her family could come to church with us last week. What a joy that was!
~I don't understand morning people at all.
Then again, I don't understand night owls.
Deductively, where does that leave me?

~At what point does the no-cost Kitchen Fairy come clean my kitchen while I'm at work?

~During the final scene of "The Music Man" last night, my son had his costume pants on inside out - and it was obvious. We took my friend's admonition to heart and didn't say a thing for fear of embarrassing him. Later, as we walked to the car he said, "I'm sure you couldn't tell, but I think my pants were inside out. I thought it was strange that the fly was INSIDE the pants."
I actually had two Angel books to give away. One is going to Betty at A Corgi in Southern California and one is going to Daily Decadent. Please email me your mailing addresses, ladies. 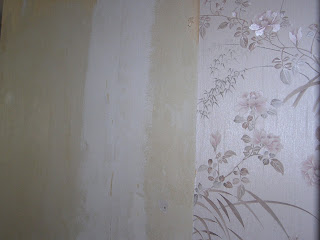 One year ago you all told me to take down the wallpaper in my bathroom. I finally did that!! Now for the painting. It's all going to be finished by April. Oh yes it is!!

A car in front of me this week had a window sticker advertising a urologist. WHY?

Oh, taking down wallpaper...THAT's a big job. And cleaning the kitchen? I think I have to do that today. We're off from school for the Snowstorm of the Century!

Yeah on the wallpaper removal!

I remember that conversation a year ago. It must be a relief to see that progressing.

You are a Mid Day Muse! And my brother goes to a urologist named Dr. Small. Again, why?

I don't understand morning people either!!

My son and I are night owls and my husband is a morning person. This makes for some pretty interesting mornings in our household!

When you figure that out, when the kitchen fairy comes, please let us know.......I NEED her!

I have bumper stickers on my car for both my Gyno and my Mamographer.
Is that a problem?


Have a great weekend!

Wallpaper is the WORST! Yay for that job being done!

Yippie! Yippie! I won something! Thank you Caution!

thanks; looking so forward to reading that book; LOL I just read what you wrote in your comment box "waiting for comments since 2008, that's a kick"

too cute about your son and his pants in the play; wise not to say anything to him :)

good for you for getting the wallpaper removed! painting is always the funner of the two (no, I don't think funner is a word but I use it all the time :)

Just loved this post... coming from SITS. Random, but are you going to Bloggy Boot Camp in Baltimore?

Oh gosh...when we move next week we have SOOOOOOOO much tacky, old wallpaper to take down....oy!

I am the night owl. Consequently, I love weekends even more than some!

Are you kidding? You'd BETTER visit if you're ever in my neck of the woods. If I ever open my email box, I'll try to remember to send you my cell number!