Maybe it's the element of the masculine ego tinged with the tenderness of a parent.  Maybe it's the deep voices saying the sweet words of love.  Maybe it's all those rough whiskers softening into a smile when the splinter finally comes out. 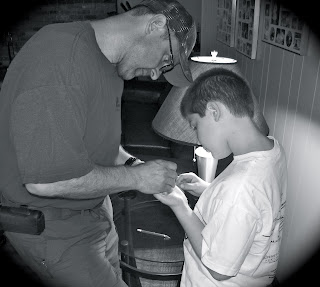 Whatever it is, it gets me every time.
Earlier this week we sat in the blazing sun at a track meet.  The heat index was about 100 degrees, and our dinner was burning in the oven at home.  Kids were overcome by the heat and a couple threw up, but still we sat there waiting for our son's run.  Checkered repeatedly took work calls and handled a couple of crises.  The dad below us tried valiantly to finish a work project on his laptop. We were all there for the same good reason.
A few seats over from us sat a dad in his heavy work clothes.  He looked entirely miserable.  His eyes, though, never left his son.  In the stadium, in the infield, on the track - those dad's eyes followed his boy.
Eventually the boy made his way up the bleachers to his dad.  They stood there, awkwardness all over the place and no words between them.  Finally the boy said he had to rejoin his team and he walked all the way down the bleachers.  Then he stopped.  Looked around at all the people watching him.  And again climbed back to his dad.  He leaned over in that heat and with all of us looking on, that teen-aged boy kissed his dad.
"Dad?  Thanks for being here."
And then he ran down the bleachers and was gone.
I thought I was the only one with a melting heart until I heard one of the ladies near us asking, "Did you see that boy?"  Of course, the lady asking had already complained that she had just spent $85 on her hair just to have it ruined in the heat and the wind.  But she said it was worth it.
A dad's love surely is a grand thing, isn't it?
Posted by Caution/Lisa at 9:02 AM

Good grief! I'm not even a crier and that brought tears to my eyes! If dads only realized just how much their sons crave their love and approval. What a beautiful moment that was.

Great, you made me tear up. I loved this post!

Awwwwe! Be still my heart! I love it. Makes my day to read this.

They are so tough on the outside and mush on the inside, especially when it comes to their kids. This definitely brought a tear to my eye!

thanks...
made meblubber like a baby...
yes love parents...
kids...
nakid grandbabies too... cept when they pee on the kitchen floor...
badley leaves his mark everwhere...

thanks...
made meblubber like a baby...
yes love parents...
kids...
nakid grandbabies too... cept when they pee on the kitchen floor...
badley leaves his mark everwhere...

Yes, and in this house it is dad and his girls. I truly feel sorry for the poor male that will one day have to ask his permission to marry one of his daughters. Oy.

What a sweet post. I wish all boys had fathers that cared as much as the ones you described.

Pass me a tissue please. I know what it's like to sit for hours at a track meet in 100 degree weather. My granddaughter would have events hours apart, and sadly not that many parents sat through it all. If it was not a local meet, it was even worse..

How did dinner turn out.

I think it's great that the kid went back up, kissed his dad and said those words. That's awesome. Most kids would never say such a thing in public.

Thanks! This was beautiful!

You have no idea how much this post touched me.
A father's love is one of a kind.

speaks volumes of the love the father had for the son and the love the son had for the father that the son would say and do such a thing in public, being a teenager and all! I bet you all let out a collective breath after you heard and saw what he did

That's beautiful; just like a Hallmark commercial. (Really, I mean it.)

Tears. Tears. Tears.
Yes, a fathers love is awesome...aren't our kids so lucky too?? Don't answer, I know.